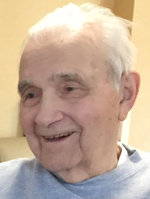 Norman “Ward” Miles , 84, of West Belmar, NJ peacefully passed away with his family at his side on September 1, 2018 after a difficult and brave battle with illness over the last year. Born in Newark, to Norman R and Lillian Miles, he moved with his family to West Belmar at the age of six. He attended West Belmar School, graduated from Asbury Park High School in 1951 and earned his Masters Degree in Business Administration from Monmouth College. He worked and then operated, along with his brothers, the family business, E.N.Plates, Inc Stationery & Office Supplies, in Newark from 1953-1999.
The ultimate family man, Ward remained, to the very end, dedicated to Lois, his wife of 63 years, his children, grandchildren and great grandchildren. He was also an active and long time community volunteer, once recognized as the Citizen of the Year in Wall Township. He was active with the Monmouth Council Boy Scouts for over 54 years serving as a Den Leader and Cubmaster at Pack 78 in West Belmar, Scoutmaster of Troop 194 in Wall Township and Committee member of Troop 82, Allenwood. He was awarded the Silver Beaver Award for his county wide volunteer efforts. He also served as Commissary advisor and Lodge Advisor of Na-Tsi-Hi Lodge 71 Order of the Arrow where he was bestowed a lifetime membership for his dedication. He was a Woodbadge training recipient and instructor and seven time Philmont Scout Range expedition leader.
For many years he, along with his wife Lois, were fixtures as volunteers at the West Belmar School Field Day-cooking and serving refreshments to the students and families. Ward was a 66 year member of the First Presbyterian Church of Belmar, serving as a Sunday School Teacher, Deacon, Elder and Trustee during his adult years.
Ward was predeceased by his younger brother Grant G Miles. He is survived by his loving wife of 62 years, Lois Jean (Sawyer), His children and their spouses-Mark(Nannette)of West Belmar, Gary (Toni)of Jackson, Gregg (Christine)of Wall Township, Edward(Cheryl) of Brick and his loving daughter and caretaker in his final years, Penny Miles (Don) Sanservino of West Belmar. “Pop” is also survived by his 14 adoring grandchildren and 19 great grandchildren. Also grieving his death are his brother Edward Miles and wife Susan (West Belmar) and beloved “little sister” Margaret (Peggy) Strecker and her husband David (Mantua, Ohio), and his many nieces and nephews.
Friends and family are welcome to attend a visitation Wednesday, September 5, from 4:00pm -8:00 PM at Orender Family Home for Funerals, 2643 Old Bridge Rd, Manasquan, NJ with a prayer service to begin at 7 pm.
Burial at a time to be yet determined. In lieu of flowers, donations can be made to Troop 82, BSA c/o James Milton 1023 17th Avenue Wall, NJ 07719. To send condolences to the family please visit www.orenderfamilyhome.com.